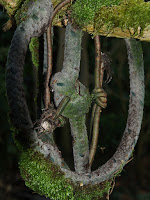 This site is about ethics of care: a philosophical reflection on the action of man as a caring being. In philosophy, care is always treated somehow in a stepmotherly fashion: it was "women's business", which in consequence, one had not to be taken too seriously. It was Martin Heidegger, this great but also a dubious thinker of the twentieth century, who perhaps gave care for the first time a central place in his work. He called it an "existentiale of the Dasein": a fundamental feature of our being human. Men stand caring in the world.

Later on, thinking about care was taken to heart by feminist thinkers like Joan Tronto. She also approaches care as a fundamental feature of our being human. Her definition of care is similar to this of Heidegger, but she looks from another perspective. Heidegger approaches care from a metaphysical outlook. He doesn't focus on realising real changes in the lifeworld. Joan Tronto, who really wants to move concrete stones in the river of our daily existence, makes ethics of care into political ethics. What by her is at stake, is our responsibility for each other as vulnerable beings and the just distribution of burdens and delights in care.

I look at ethics of care from a very specific perspective: we are all people of modernity, a cultural philosophic constellation who bears wonderful possibilities in it, but at the same time has it created in some degree an unsteady concept of man. In the centre of the daily experience of modernity, stands the Cartesian cogito: " I think therefore I am." Only because I, as a human being, observe the world, it gets sense and meaning. Modern man constitutes the world with his thinking. He sees himself as a "humanistic hero", who can give shape to his place in the world on his own. He is an "I", an "Ego", a "Self".

But at the same time with the modern man, also arose modern science, which thinks only objectifying: it doesn't look after the fundamental features of the things, but it only wants to figure out how they are functioning. This was at the same time a blessing and a disaster for humanity. A blessing because this reduction enabled science to make significant discoveries. Think for instance of medicine who made it possible to heal so many terrible diseases. But at the same time, modern science with its objectifying regard caused a lot of problems: it considers the earth as an object of which man can dispose of as he pleases. That provoked among other things gigantic environmental challenges.

But there is still another consequence of this duality: modern science also leads to a somewhat unsteady concept of man. About at the same time as the emergence of the Cartesian cogito, began the objectivation of man in science. In premodern times, we regarded ourselves as God's chosen children, created in God's image, but in modernity, man and his body became gradually objectivated. Our body turned into a machine; blind evolution caused our existence, and our ego became a desperate horseman, who tried in vain to drive two fractious horses, the Es and the Über-Ich. In the end, our brain became devaluated to a computer in which only blind laws of nature were at work. Freedom doesn't exist anymore: our brain dictates all our so called actions of free will.

So in modernity, the thought of human autonomy was worshipped, but at the same time, the existence of it was held to be impossible. Of course, this has not happened on one day: it took more than for hundred years. But at the end of this evolution, we can only come to the conclusion that modern men are desperately at odds with himself. With Charles Taylor, we can state that modernity is a paradoxical constellation. Modern man can only approach the world and himself from a first person perspective, this of the autonomous ego, but at the same time, we can only look at ourselves and the world in the third person, as an object. Michel Foucault expresses this in another manner: he defines man as a transcendental-empirical doublet: someone who gives meaning and is an object of investigation at the same time. Thus it is not the case that we are a subject of an object: we are always both at the same time.

This manifests itself pre-eminently in care. Gily Coene en Koen Raes state that in care, two entirely different language games are applied: a scientific language game that reduces man to a number of variables who escape at his conscious will en therefore at his responsibility and an ideological language game in which freedom of man and consequently his responsibility has a central place. Both positions are constantly mixed up. They seem to be intertwined with each other in an inextricable knot. The question is, therefore, how we can disentangle this knot.

(The complete bibliographic data you can find on the page:"Bibliografie - Bibliography")